In our last blog post, we went through the process to de-glaze unitized and cassette curtain wall units that had been previously glazed using 3M’s structural glazing tape (SGT). The simple six-step process, developed by Project Vision Dynamics (PVD) in Plant City, Florida,  is a simple and safe process to get the IG units and frame apart to help keep your curtain wall installation moving along without losing excessive time. Now, we’ll walk through the re-glazing process and you’ll have the all the tools you need for success.

The most important document you’ll get from 3M is the SOP (Standard Operating Procedure) that is tailored specifically for the exact IG and extrusion you are using in your project. That is the ultimate document to consult when re-glazing, but all SOPs follow the same basic seven-step procedure which are outlined below:

Place the deglazed extrusion on your workbench.  Clean the surface where the tape will be applied using a 70% isopropyl alcohol (IPA) /water blend using a two towel method. The two towel method is simple. Take two lint free towels and fold them into fourths. Wet one lint free towel well with the IPA, and have a dry, lint free towel in the other hand. Starting in one corner, wipe the IPA on the extrusion and follow about 8 inches behind with the dry towel. Don’t do any more than two legs of the extrusion before you unfold the towel and expose clean sides on each towel. Finish the last two legs of the extrusion. If for any reason the towels are excessively dirty, repeat the cleaning step again.

The most frequently used adhesion promoter is 3M’s AP111, but sometimes the SOP will specify Primer 94, depending on what paint system is on the extrusion. The AP111 can be applied via a dauber bottle, followed by a lint free cloth wipe, or you can wet a lint free towel and, using the two wipe method outlined above, follow the same procedure.

Once you have applied the adhesion promoter, you have about a 10-minute window to apply the glazing tape. (If for some reason you get called away for more than 10 minutes, don’t panic! Just start over again at Step 1, and you’re good to go!). Apply the tape down each leg of the extrusion using an HTA (Hand Tape Applicator). Here are two tips to help you: Don’t push down on the HTA; just pull the HTA lightly in toward the inside of the extrusion, and let the SGT unwind naturally from your other hand. Don’t try to keep the tape under tension, which can stretch the tape.

Once you apply the tape while also making sure the corners overlap, trim each corner with a sharp razor blade in a guillotine-like motion to create a nice tight fitting butt joint at each corner.

Using a j-roller, make two passes with the roller on each leg of the extrusion. You’re only trying to exclude air from the bond line on your first pass, so keep it nice and light! On the second pass, bear down a bit more using 15 pounds of pressure. (15 lbs. is really easy to achieve even for a smaller person). 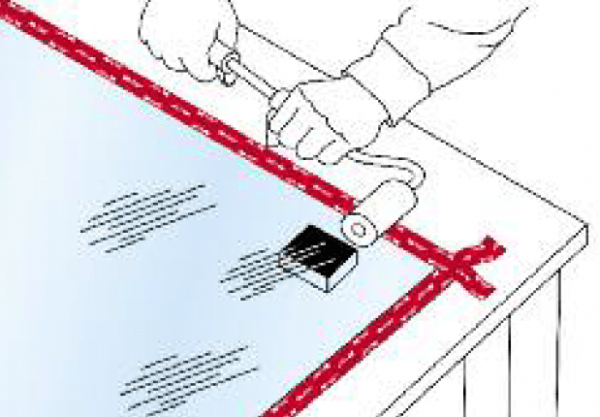 You can set the extrusion aside at this point. If you’re going to apply the IG unit on another day, put a piece of masking tape over the butt joint at each corner to prevent the liner from lifting prematurely and hang the extrusion on a peg.

If you followed the deglazing procedure properly, you should have a fairly clean IG unit free of any excess tape or contamination. If you don’t, grab a lint free towel and wet it well with the IPA,  cleaning the glass with an additional cleaning using a scrubbing motion.

If your glass is clean, then you can go to the two cloth method as you followed in the extrusion step. Wipe all the way around each leg, doing two legs before unfolding and refolding your wipe, to a clean face before finishing the final two legs.

The adhesion promoter, AP115, for the IG unit is chemically different from the AP111 used on the extrusion. But, like the AP111, the application method is similar. You can use a dauber bottle, or  a wet a lint free towel using the two towel method again to apply the silane adhesion promoter.

Joining the IG Unit to the Frame

If you’re re-glazing a cassette system, you’re typically going to leave the IG unit lying on the workbench, applying the frame from the top. If you’re re-glazing a unitized system, you will likely have the extrusion lying on the workbench, applying the IG unit from the top, as the unitized frames are much deeper than the cassettes.

In either case, once you have applied the silane adhesion promoter to the IG unit, you have a 10-15 minute window to join the frame and glass. In either case, wipe the red liner covering the tape with a lint-free wipe before proceeding, to make sure that no dust or contaminants are present.

With the cassette, you’re going to do a process called ”pig-tailing.” This is a simple process where you take a blade or utility knife and flick up the edge of the red release liner from each corner, pulling away about 3 inches of the liner toward the center of each leg, as seen in the diagram below.

Once you have all the corners exposed, get your buddy, on the opposite end of the frame, and turn it over together to get the tape pointed down toward the IG unit. Using your fingers, lower the frame to help align the frame edges and the IG unit. Once aligned, press down once lightly on the corners to temporarily anchor it in place.

You can now push down once by hand around the frame perimeter to position everything properly. You will then take the Developmental Industries SGT-PPA 150 pressure-applicator, set at 80 PSI, and make two passes down each leg of the frame/glass composite, to achieve good tape wet out and immediate handling capability. See diagram below. 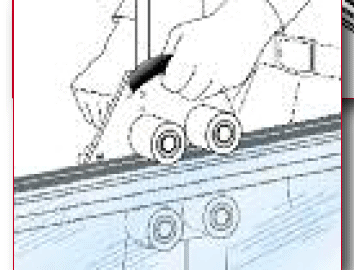 Since the unitized system will likely be larger, you will not be following the pig-tailing procedure as with the cassettes. You will completely remove the liner from each leg of the extrusion and then lift the IG unit using a suction cup device to safely lift and move the IG unit into place as in the diagram below.

At this time, the Developmental Industries pressure applicator does not work on deep unitized frames. This problem will be solved in the very near future as the folks at PVD have developed a new pressure applicator that works on deeper frames. In the meantime, you can use an Irwin Quick Grip Bar Clamp, that can be purchased at any hardware store, and work your way around the unit until you have applied a clamping force all the way around. One caution: some of these clamps can generate 600 lbs. of force which will crack the IG unit. You only need enough force to wet out the tape – typically the 100-150 lb. range is more than enough.

Apply the Sealant at the Corners

The last step is to gun a thin bead of sealant around each corner (3-4” around each corner) of the frame where the tape/frame/glass interfaces, and tool it into place. This can be done with specific spatula-type sealant tools, a wooden tongue depressor, or if all else fails, your fingers.

A one part, neutral cure silicone sealant is preferred, but any gun-able waterproof sealant will (technically) work. 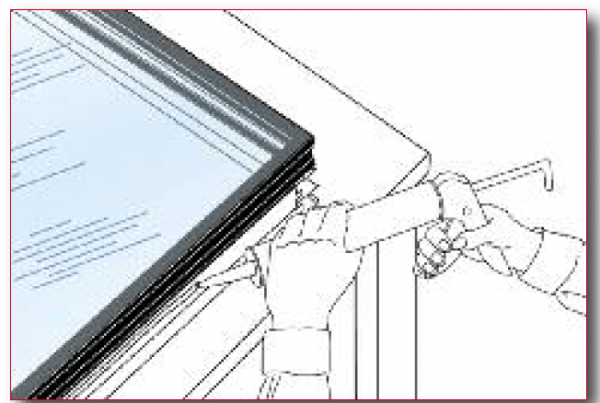 You’re done! With just a little practice, a cassette can be deglazed and re-glazed in under an hour. A larger unitized system will take a bit longer. Still have questions? Contact Steve Sherman at PVD (www.projectvisiondynamics.com) or Rick Alexander at Tom Brown, Inc..