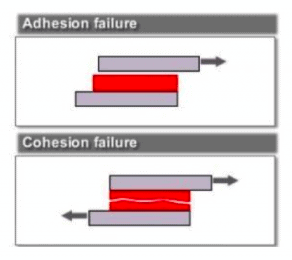 Pressure sensitive adhesive (PSA) tapes and die cut parts provide efficient methods of assembly in many applications. If die cut parts or tape failure occurs, the entire assembly or subassembly is at risk.

In most cases, failure can be anticipated and avoided. This post will provide some insight into the types of failure and success factors to be considered so failures can be avoided.

As the most common, adhesive failure occurs when the adhesive delaminates or de-bonds from the intended surface(s) without leaving any residue. However, there are certain applications where adhesive failure is actually desirable. Think of the protective film on an appliance or paint masking tape.

Cohesive failure occurs when the adhesive “splits” or is sheared through the bulk of the coating. This usually leaves adhesive residue on both the tape backing and the intended substrate.

Mixed mode failures occur as a combination of both adhesive and cohesive failures. It is not uncommon for external factors such as plasticizer migration or elevated temperatures to have occurred when encountering a mixed mode failure.

Substrate failures are technically not adhesive failures but a tape design problem. These failures happen less frequently but point to a tape backing delaminating or otherwise destructing in some fashion. This can often be the result of environmental or mechanical forces that were unforeseen or misunderstood.

We’ve examined the four types of adhesive failures, now let’s explore the four categories of factors that increase the chances for success.

Knowing the chemical makeup of the surface you want a tape or die cut part to adhere to is a key step in proper product selection. In our last blog post, we discussed surface energy and its influence in depth.

Simply put, surfaces such as metals and glass exhibit high surface energy, making it easier to bond to them. Plastics such as polyethylene and polypropylene exhibit low surface energy similar to the surface of a freshly waxed car. This makes them more difficult for bonding. Also, there are many plastics in between both extremes.

Tape manufacturers offer a variety of tapes that feature bonding capabilities with the wide range of surfaces available. Your converter can help you in selecting the best candidates.

Not every bonding surface is flat. Often, you’ll find tapes and die cut parts required to adhere to concave or convex curves and over sharp angles. These curves or angles create tensile, cleavage, and other forces on the bond line that will impact performance over time. The example below shows how using a thicker and slightly softer adhesive can overcome the forces that would otherwise cause lifting or “flagging.”

The adhesive systems on tapes behave like both a solid and a liquid—called viscoelastic behavior. The diagram above shows the benefit of selecting the right adhesive thickness to maximize the flow or “wet out” of the adhesive into the microscopic valleys in the surface. This increased wet out translates directly into improved bond strength.

Tape manufacturers offer a variety of tapes with varying adhesive coat weights or thicknesses to allow the end user to account for any surface texture and achieve the best possible bond.

As silly as this may sound, tapes are not particularly smart. They can’t delineate between dust, oils, mold release and other contaminants that might be on a bonding surface from upstream operations. Instead, they adhere to the first thing they encounter. If that’s contaminants, you’re headed for trouble.

In most cases, a simple wipe with a 50/50 or 70/30 blend of isopropyl alcohol and water (common rubbing alcohol you can buy in a drug store) is enough to remove most contaminants.

However, some situations require more aggressive surface prep. Some metals have cutting fluids or oils that might require a degreaser or a more aggressive solvent than IPA to cut through and remove the oil.

Some plastics might require a surface treatment such as corona discharge, plasma or flame treatment to gain sufficient surface energy to achieve high bond strength. In some high performance architectural applications such as curtainwall and window wall bonding, a primer might be needed on the metal extrusion and a silane coupling agent on the glass or infill panel to achieve bond strengths capable of withstanding wind loads.

Another critical success factor is understanding the environment the bonded assembly will be exposed to during service life. This includes (but not limited to) chemical/solvent resistance, UV resistance and temperature.

Contact with solvents and chemicals are an innate part of many tape applications. This can be as simple as common household window cleaners used on residential or commercial windows; the grease, oil and gasoline encountered under a car hood or exposure to jet fuel in aerospace applications.

Solvents and chemicals can have different effects on the adhesive bond line. Some chemicals can swell or soften the adhesive affecting bond strength while some solvents can partially dissolve the adhesive. Tapes with rubber based adhesive systems typically don’t do very well with solvents or chemicals. However, they perform quite well in aqueous environments. Acrylic adhesives, particularly those that are highly cross-linked, tend to exhibit good solvent and chemical resistance.

UV exposure is another environmental factor that should must considered. Prolonged UV exposure can affect the adhesive system and even the backing or carrier the adhesive is coated on. UV light can cause the backing or adhesive to embrittle, discolor and degrade over time. Tape portfolios abound with products that can easily handle UV exposure and certain products like protective films will even state how long they can resist UV exposure.

The last critical factor is service temperature. Low temperature exposure can cause some adhesives to become very firm and lose tack and adhesion as the glass transition temperature is approached (the adhesive becomes more “glass like” rather than more “rubber like”).

High temperatures can cause the adhesive system to soften and even flow in some cases. The associated drop in cohesive strength can result in failure if there are any shear, tensile or cleavage forces acting on the bond line. Tape manufacturers are aware of the range of temperatures that are encountered in industrial bonding applications and have a host of products that can handle a variety of temperature extremes.

After any tape is applied, there will likely be a force (or forces) acting on it—even if very minimal. These forces typically consist of peel, shear, tensile, cleavage and compression.

Some tape applications are very “peel intensive.” When you apply a paint masking tape for a painting project, apply a Post-It® Note to your office wall or buy a new appliance covered with protective film, you have a peel intensive application. In these cases, you know that the application of the tape is temporary and it needs to remove cleanly after some period of time.

Shear forces are present in applications where a tape is asked to support a load. This can be a static load such as using an adhesive backed hook to hang a picture in your home. Also, it can be a dynamic load such as a strong wind gust hitting a side wall panel on a truck or utility trailer.

Tensile forces are forces that act in the ‘Z” direction of a bond uniformly over the entire bond area. A tensile force can act on the bond line or the tape carrier itself. The tensile strength of tapes, particularly self-wound tapes is often included in technical data sheets to make comparisons easier.

Cleavage forces are a type of pull force that acts on the leading edge of a bond line. It is analogous to using a crow bar on the end of a board that is nailed down to pry it loose. This leverage effect on the small area of the leading edge causes failure at lower levels than what might be observed in shear or tensile tests.

Tapes and associated die cut parts are made to attach quickly. That’s a big part of their attraction as an assembly method. Application can be by hand, (which is still the way many tapes are applied) by a taping machine or automatic applicator.

Time, application temperature and pressure are the three variables that should be controlled at the application stage.

Good application pressure can accelerate the wet out process and increase adhesion. In many cases, tapes or die cut parts might be applied using only finger pressure. This is not necessarily a bad thing. Smaller parts or narrow tapes can be easily applied using finger pressure in many instances. Larger parts and wider tape can benefit from using a rubber roller or squeegee to help expel air from the bond line. Air bubbles are areas where the adhesive is not in contact with the intended substrate and a reduction in adhesion will result.

Dwell time is also a factor when looking at tape and die cut part application. It is particularly critical when testing these products. Different tapes have different build times with adhesion. Rubber based adhesives tend to build quickly and can reach peak adhesion levels very quickly—often in leas than 24 hours. Acrylic and silicone adhesives require build slowly and can require up to 72 hours to reach their peak adhesion levels.

Tapes and die cut parts typically have four types of failure modes. These failures can be attributable to four categories of factors: surface, environment, joint stress and application.

By asking good qualification questions up front, these factors can be understood and managed. The right tapes and materials can be selected that will handle the specific requirements of each application. This understanding can eliminate most die cut parts and tape failures before any significant cost is incurred. This not only saves money and time in the long run but also protects the end user’s credibility by providing robust assemblies that utilize the best materials for the job.