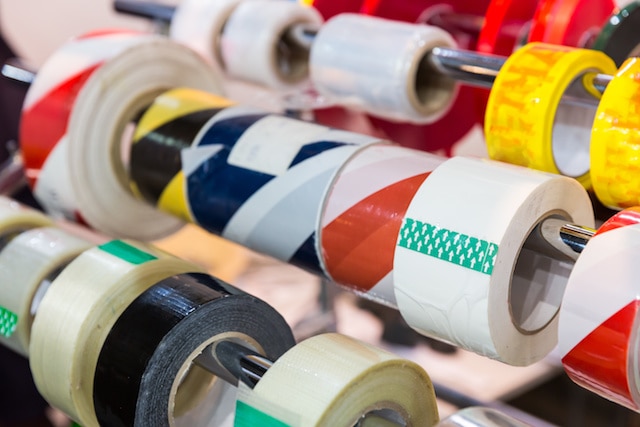 When it comes to pressure sensitive adhesive tapes, there isn’t a convenient single rating system for how “strong” the tape might be. The adhesive systems on these tapes operate differently in a variety of environments, and there are performance properties that can be judged as more important than others for certain applications.

Generally tack, peel, and shear resistance are the primary physical properties that are measured and reported. There are many more tests that can be performed to develop a more in depth understanding of a tape’s properties. These might include testing for fire or burn properties, solvent resistance, and a host of other specialized tests but if you have a basic grasp of peel, tack, and shear, you can make some reasonable inferences about how a tape might perform.

Some adhesive systems can tolerate larger temperature ranges than others due to their base chemistry and the way they are formulated and processed-although these temperature extremes may potentially be unnecessary for certain applications.

Shear testing measures the ability of the adhesive system to maintain a bond under a constant load. It provides insight into the internal strength of the adhesive itself. The testing can be performed in a static mode and in a dynamic mode. Static shear testing is useful when a tape may be asked to support a constant load in an application. (think of holding a panel onto a vertical frame system). Dynamic shear testing can provide useful information on how well the tape can resist a sudden load such as a shock or a sudden wind load.

Tack is the property that controls how quickly a bond is formed when it is brought into contact with a surface with very slight pressure. It is ability of the adhesive to “wet” the surface that it contacts. The most common way we experience tack is with our thumb. We stick our thumb onto the tape’s adhesive surface and pull it away. The more it “grabs” our thumb, the tackier we perceive the tape to be. The thumb however is not a reliable predictor for  how a tape will function in an application.

There are applications where tack(specifically high tack) is very important. Flying splices on paper or film converting machines and wire management hooks and clips for appliances are two applications where immediate loads will be applied and the tape must hold without delay.

Tack is sensitive to a variety of factors including the properties of the adhered (typically roughness or topography) along with temperature and processing conditions.

There are 4 principle test methods for measuring tack- loop tack, rolling ball tack, probe tack, and quick stick. Without going into too much detail about individual test methods, loop tack is often viewed as the most repeatable and consistent and many tape manufacturers now report it routinely. A loop of tape is formed and brought into contact with a test plate.  The loop is then pulled away on a tensile testing machine and the value recorded. The downside of loop tack is that the substrate the adhesive is coated on can have a significant effect on the results.

Probe tack was popular for many years since it more or less resembled the “thumb tack” test but wide variability in the test data has often been observed. In this test, a metal probe is brought into contact with tape surface, allowed to dwell for a specified time, and then pulled away. The force of removal is reported in grams.

Rolling ball tack is a simplistic test where a ball bearing is released down a ramp onto a tape specimen. The adhesive “arrests” the motion of the ball bearing due to grab and a “plowing effect” and the distance need to stop the ball is reported. This test is often used as a quick QC test on a production line.

Quick stick also uses a tensile or peel tester as in the loop tack test to pull a tape specimen off at a 90° angle with short or no dwell time. This differs from normal peel adhesion testing since only the weight of the tape itself is used to initiate the bond or a very light 25 gram roller.

Peel adhesion testing is measuring the force required to remove a tape specimen from a test panel at a controlled angle (usually 180°or 90°), at standard rate, and with a defined dwell time.

The tape is applied using a weighted rubber roller to a stainless steel (or other panel material that is defined) and then allowed to dwell on that panel. The tape can be peeled away immediately but dwell times from 5 minutes up to 72 hours are common.

Some adhesive applications require temporary fixing of the tape to the surface with the intent of removing it in the future without adhesive residue. Think of the surface protection films used on appliances or paint masking tapes. In these applications, lower peel levels(and likely tack) are needed to impart stable removal over time.

In more permanent applications, higher peel forces will likely be needed in order to permanently affix the tape to the substrate or to bond two surfaces together. This does not necessarily mean that the tape must exhibit high tack (whether you test it with your thumb or a loop tack method). Many high tack tape systems depending on how they’re formulated might have lower ultimate peel strength versus a tape that seems “not as tacky” but develops very high peel adhesion to specific surfaces.

One final note- peel testing on a standard stainless steel panel can be useful but it is imperative that peel testing also take place on the surfaces to which it will actually be applied. That peel testing will yield a much richer date set. Those panels can also subjected to various humidity conditions, high or low temperatures and chemical exposures that the tape will actually see. A much deeper understanding of field performance can be realized (and it may or may not have anything to do with tack as we perceive it).

Tapes are typically subjected to various types of accelerated aging. This may involve aging the actual roll of tape at some elevated temperature and/or humidity to gain insight into how well the tape will survive shipping and storage conditions once it is in the field. These studies provide data that helps the manufacturer set a shelf life for the tape so the customer can be reasonably assured that the tape will work when they receive it.

Other aging studies can be significantly more involved. They might include making test panels and exposing the panels to the sun in a state such as Florida or Arizona for a year and then performing peel and shear tests on those panels. In other cases, actual mock ups of the finished product might be fabricated and then subjected to artificial sunlight, humidity, cold chambers, or all of these in some cycling sequence in order to understand how these environments affect the tape’s performance and behavior over time.

If you’d like to learn more about adhesive tape testing or to discuss the specifics of an application, contact Tom Brown, Inc. today.