A Brief History of Pressure-Sensitive Adhesives

Current global demand for pressure-sensitive adhesives is valued at approximately USD $52 Billion or roughly 47 billion square meters per year and is expected to grow to USD $73.5 Billion by 2024¹. To give you some perspective on those numbers, 47 billion square meters is over 18,000 square miles of tape or enough to cover the entire state of New Jersey more than twice! The US demand for pressure sensitive tapes is 9.9 billion square meters per year or approximately 25% of the global total. That’s enough to cover more than half the state. Where did our big industry get its start? Who invented pressure-sensitive adhesive tapes? To answer those questions we have to go back over 160 years.

Necessity is the Mother of Invention

In 1845, a surgeon named Dr. Horace Day made the first crude surgical tape by combining India rubber, pine gum, turpentine, litharge (a yellow lead oxide), and turpentine extract of cayenne pepper and applying that mixture to strips of fabric. It was the first “rubber-based” adhesive and Dr. Day used it in his practice as a surgical plaster.

Larger scale manufacturing of similar medical tapes began in 1874 by Robert Wood Johnson and George Seaburg in East Orange, NJ. That company would soon become the Johnson & Johnson Company we know today. Later in 1921, Earle Dickson who bought cotton for Johnson & Johnson noticed that the surgical tape kept falling off his wife Josephine’s fingers after cutting them in the kitchen. He fixed a piece of gauze to some cloth backed tape and the first Band-Aid ® was invented.

It took almost 75 years from Dr. Day’s first crude tape until the early 1920’s when the first industrial tape application appeared. The application was electrical tape (although the adhesive was more of a cohesive film than the electrical tape we know today) to prevent wires from shorting.

The second major industrial tape application was a result of the rise of the American automobile in the 1920’s. Two toned automobiles were becoming popular and auto makers needed a way to produce clean, sharp paint lines while using the new automatic paint spray gun. They started using the surgical tape that was available but the paint wicked through the cloth backing and caused defective paint jobs.

Richard Drew, an engineer at Minnesota Mining and Manufacturing (3M) happened to be at a local body shop testing their WetorDry® brand sandpaper in 1925 and he saw the workers struggling to get clean paint lines. He went back to his lab and created a 2 inch wide crimp backed paper tape that became the first “masking tape” for painting. In case you’ve ever wondered, the brand name “Scotch” came about when Richard Drew was testing some of his paint masking tape and the auto body painter yelled at him to “take that tape back to your “Scotch” (indicating that they were being cheap) bosses and tell them to put some more adhesive on it!” The name was soon applied to the whole product line and became one of the industry’s most recognized brand names.

Richard Drew also founded the first tape laboratory at 3M in 1926 and went on to create a clear, water proof tape to seal cellophane food wrap for bakers and grocers. This cellulose tape became what we know more commonly as Scotch Tape and consumers soon learned that they could repair torn book pages, documents, and even ripped window shades with this new product.

Jumping ahead to 1942 and World War II, Johnson & Johnson developed duct tape to seal canisters and repair equipment for the military. The tape was a basically a polyethylene coated cloth tape with good “quick stick” properties that made it easy to use in the field for emergency repairs. The world never looked back and duct tape can be found in almost any home or tool box. 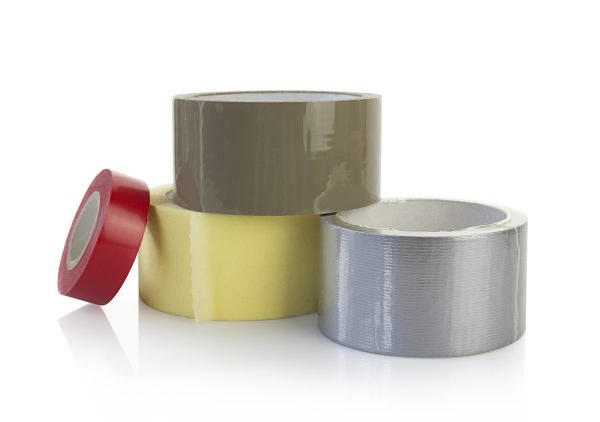 Pressure –sensitive tape usage really started to grow in the 1960’s and 70’s. During this time there were tremendous strides made in adhesive formulation strategies and the emerging acrylic adhesive systems.  Adhesive performance improved significantly and the availability of new backing materials such as polymer films and foams and silicone release liners surged. These factors drove innovation and the creation of many new types of tapes for a variety of applications.

Moving ahead to the early 1980’s, we see the introduction of VHB acrylic foam tapes by 3M. This was truly an industry leading innovation as tape could now replace mechanical fasteners which had been unheard of up till then.

Today, acrylic foam tape performance has improved even more and 3M’s VHB Structural Glazing Tape actually holds the insulated glass units into mid and high rise buildings!  Who ever thought a tape could do that?

And that’s not all. We are seeing amazing innovations in adhesive tapes used in the healthcare industry. Adhesives designed to stick to different types of skin and remove without skin trauma or even when wet are commonplace. Medical devices such as strip to measure blood sugar in diabetics are made of precision coated adhesive films.

Most of us carry a cell phone and there are 25-30 pieces of various die cut tapes bonding the various layers together and sealing out dust, dirt, and moisture.

And it’s not going to end there.

The tap products we convert at Tom Brown, Inc. can easily trace their origins to these early pioneers but they have come much further. The adhesives on our double coated film tapes we use for gasket fabrication is a synthetic version of that India rubber used by Dr. Day in 1845. The acrylic adhesives on our high performance bonding and sealing  tapes are more sophisticated. They rely on the reaction of various acrylic monomers in solvent. They can do amazing things such as holding large pieces of glass into metal extrusions on large building without the need for mechanical fasteners.

Now you know some of the origins of our industry. Just take a look at Tom Brown’s tape products and you can see that pressure-sensitive products have come a long way since Dr. Day’s first invention.